MUNSA or how to Survive MUNs without sleeping for 72 hours

About a month ago I had the opportunity to participate in my first MUN and the one that would trigger my lifelong passion for international relations. MUNSA 2022 popped up in my life by pure chance when, after a debate at my university, a complete stranger approached me to congratulate me about my intervention and told me that I would be good at debating current human rights issues. I followed my instincts and the next day I was already signed up. After months of waiting, dozens of sentences read and hours of work, the key day arrived and began one of the most fruitful journeys of my life.

At the end of the first day of the debate I had only intervened twice and the fear of not knowing what I was facing took hold of me. I felt that as well informed as I was on the topic, I could not speak eloquently. Luckily everything changed by the end of the day. Meeting people who had the same fears, talking to the Chairs and seeing that they were people just like you and getting to know better of my fellow committee members boosted me for the following days. The socials were crucial. From being able to show the greatest city in the world, my city, Barcelona, to all the participants, to the big party the day before the final debate, as well as the gala night at the Estrella Damm brewery.

Each day I felt better at debating than the day before. The words and the proposals came out by themselves, I argued vigorously with the countries opposed to the position of my country and despite little to no hours of sleep the adrenaline kept me alive… Who would have thought that after all I would have been able to present 1 minute of silence, 11 caucus proposals or a motion for a resolution that was approved in extremis after great opposition from other countries. All in all, an extraordinary experience that has only reinforced my idea of finding my place in the world of international relations. And it is only the beginning, now I am facing a new MUN and there are very interesting projects in mind. Thank you MUNSA for all that you have achieved, I hope to be able to continue with you for many, many years to come. 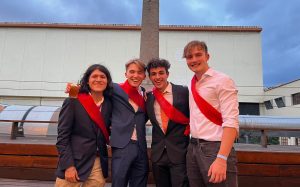