Since ancient times, human beings have been in constant transit. Some people move looking for jobs or new economic opportunities, to reunite with family or to study. Others leave to escape conflict, persecution, terrorism or human rights violations or abuses. Some do so due to the adverse effects of climate change, natural disasters, or other environmental factors.

Today, the number of people living in a country other than their native country is greater than ever. According to the IOM World Migration Report 2020, on June 2019, the number of international migrants was estimated to be almost 272 million worldwide, 51 million more than in 2010. Nearly two-thirds were labor migrants. International migrants made up 3.5% of the world population in 2019, compared to 2.8% in 2000 and 2.3% in 1980.

While many people migrate by choice, many others migrate out of necessity. According to UNHCR, the number of forcibly displaced people worldwide was 79.5 million at the end of 2019. Of these, 26 million were refugees (20.4 million UNHCR-mandated refugees, 5.6 million Palestinian refugees under the UNRWA mandate). 45.7 million people were internally displaced, 4.2 million were asylum seekers and 3.6 million were Venezuelans displaced abroad. 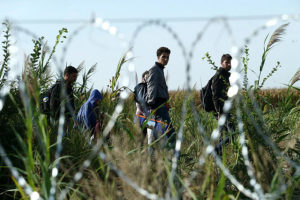 The data collected over time illustrates that international migration is not uniform throughout the world, but rather responds to economic, geographic, demographic and other factors that shape clear migration patterns, such as the migratory “corridors” established throughout the world over the years.

In 2020 the number of international migrants (people residing in a country other than the country of birth) reached almost 272 million worldwide – 48% women – compared to 258 million in 2017. Of these, 164 million are migrant workers. Likewise, it is estimated that there are 38 million migrant children, and three out of four are of working age (20 and 64 years). Asia hosts around 31% of the international migrant population, while the data for the rest of the continents is distributed as follows: Europe 30%; the Americas 26%; Africa 10%; and Oceania 3%. 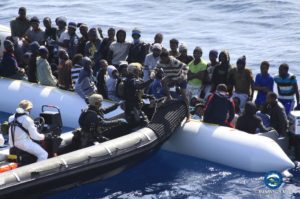 In The Origins of Totalitarianism, Hannah Arendt wrote that “the loss of national rights was identified with the loss of human rights as the former guaranteed the latter. The more they were excluded from law in any form, the more they tended to seek reintegration into the national, into their own national community”.

In forced migration, people routinely lose their right to asylum, their social status, the protection of their governments and the loss of their communities – so that their opinions cease to be relevant and their capacity for action is no longer effective. With the loss of protection from their governments, they become dependent on international treaties and the charity of other governments. As a result, by losing that protection and their communities, they lose the ability to exercise many of their human rights, since they are not under a State that can guarantee them.

The main reference to migration in the SDGs is set out in target 10.7: “Facilitate orderly, safe, regular and responsible migration and mobility of people, including through the implementation of planned and well-managed migration policies”. Other objectives also deal with different aspects of migration such as human trafficking, remittances and international student mobility, among others. It should be added that migration is indirectly relevant to many other objectives.

The International Organization for Migration (IOM)

To promote the diversity and inclusion of migrants in society, IOM has developed the Soy Migrante platform, where the personal stories of refugees and migrants are made known. The objective of this platform is to question stereotypes against migrants and expressions of hate in politics and society.